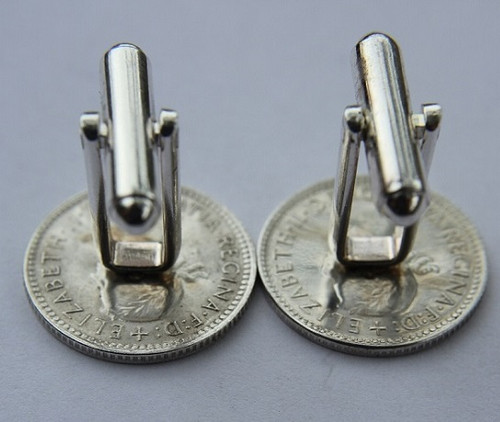 Showcase your individuality with our 1951 Australian Sixpence Coin Cufflinks. Ideal for 1951 birth year and 1951 anniversary presents.

Showcase your individuality with our 1951 Australian Sixpence Coin Cufflinks. Ideal for 1951 birth year and anniversary presents.

Fashion for the esteemed gentlemen and the ideal present for a loved one to commemorate that birthday or anniversary in 1951.

These 1951 Sixpence coin cufflinks are an ideal gift to celebrate birthdays for people born in 1951, wedding anniversaries from 1951, son’s and daughter’s being born, retirements or other important events.

Here are the upcoming birthday’s that people who were born in 1951 will celebrate over the next few years:

1951 was a truly special year – here are some historical events that happened in 1951:

Most Popular Movie in 1951: A Streetcar Named Desire

Most Popular Book in 1951: From Here to Eternity by James Jones

Most Popular Television Show in 1951: I Love Lucy

1 January – The 50th anniversary of Australian federation is celebrated. Maintenance of a Security Service.
12 April – Conscription begins as the first call-up notice is issued under the National Service Act (1951), requiring Australian 18-year-old males to undergo compulsory military training.
9 September – Australia signs the Treaty of San Francisco, formalising peace with Japan.
13 November – William McKell is gazetted a Knight Grand Cross of the Order of St Michael and St George, becoming the only Governor-General of Australia to be knighted during their term.