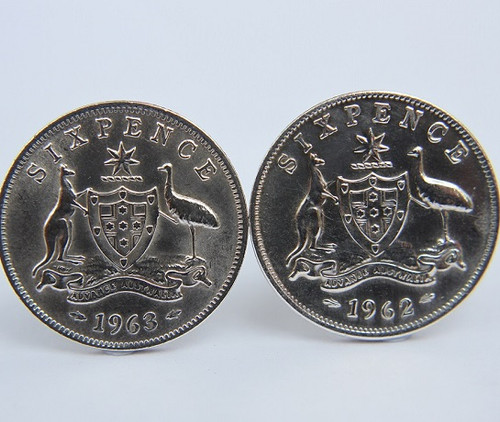 Showcase your individuality with our 1954 Australian Sixpence Coin Cufflinks. Ideal for 1954 birth year and 1954 anniversary presents.

Showcase your individuality with our 1954 Australian Sixpence Coin Cufflinks. Ideal for 1954 birth year and anniversary presents.

Fashion for the esteemed gentlemen and the ideal present for a loved one to commemorate that birthday or anniversary in 1954.

These 1954 Sixpence coin cufflinks are an ideal gift to celebrate birthdays for people born in 1954, wedding anniversaries from 1954, son’s and daughter’s being born, retirements or other important events.

Here are the upcoming birthday’s that people who were born in 1954 will celebrate over the next few years:

1954 was a truly special year – here are some historical events that happened in 1954:

Most Popular Movie in 1954: On the Waterfront

Most Popular Book in 1954: Lord of the Flies by William Golding

Most Popular Television Show in 1954: I Love Lucy

Nobel Peace Prize in 1954: Office of the United Nations High Commissioner for Refugees.

3 February – Elizabeth II arrives in Sydney on her first visit as monarch
13 February – Mawson Station in the Australian Antarctic Territory is established
3 April – Vladimir Petrov, a Soviet diplomat, defects to Australia, sparking the Petrov Affair
31 October – the first Vickers Viscount aircraft delivered to Australia crashed at Mangalore Airport while on a training flight only days after its arrival in Australia, killing 3 of the 7 people on board.