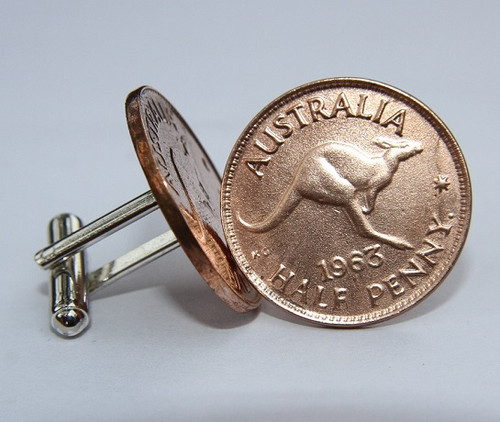 Showcase your individuality with our 1964 Australian Halfpenny Coin Cufflinks. Ideal for 1964 birth year and 1964 anniversary presents.

Showcase your individuality with our 1964 Australian Halfpenny Coin Cufflinks. Ideal for 1964 birth year and anniversary presents.

Fashion for the esteemed gentlemen and the ideal present for a loved one to commemorate that birthday or anniversary in 1964.

These 1964 halfpenny coin cufflinks are an ideal gift to celebrate birthdays for people born in 1964, wedding anniversaries from 1964, son’s and daughter’s being born, retirements or other important events.

Here are the upcoming birthday’s that people who were born in 1964 will celebrate over the next few years:

1964 was a truly special year – here are some historical events that happened in 1964:

Most Popular Movie in 1964: My Fair Lady

Most Popular Sports in 1964: Australia places 8th in the 1964 Olympic Games with 6 gold medals

Most Popular Book in 1964: The Giving Tree by Shel Silverstein

Most Popular Television Show in 1964: Bonanza

Grammy Awards in 1964: Record of the year “The Girl From Ipanema” … Astrud Gilberto & Stan Getz