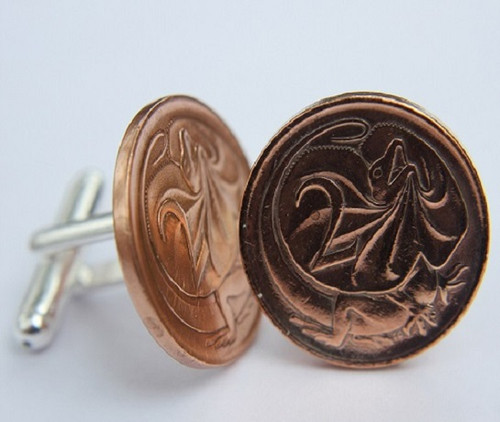 Fashion for the esteemed gentlemen and the ideal present for a loved one to commemorate that birthday or anniversary in 1977.

These 1977 two cent coin cufflinks are an ideal gift to celebrate birthdays for people born in 1977, wedding anniversaries from 1977, son’s and daughter’s being born, retirements or other important events.

Here are the upcoming birthday’s that people who were born in 1977 will celebrate over the next few years:

1977 was a truly special year – here are some historical events that happened in 1977:

Most Popular Music in 1977: “Tonight’s The Night (Gonna Be Alright)” … Rod Stewart

Most Popular Movie in 1977: Annie Hall

Most Popular Sports in 1977: The Centenary Test commences between England and Australia at the Melbourne Cricket Ground

Most Popular Book in 1977: The Shining (The Shining #1) by Stephen King (Goodreads Author)

Most Popular Television Show in 1977: Laverne and Shirley

Grammy Awards in 1977: Record of the year “Hotel California” … Eagles

5 January – Australia’s only aircraft suicide attack carried out by a disgruntled former employee of Connellan Airways takes place. The Connellan air disaster claims the life of 6 people including the pilot.
1 February – The Federal Court of Australia began to exercise its jurisdiction.
15 May – A new political party, the Australian Democrats is launched by former Liberal MP Don Chipp at Melbourne Town Hall.
1 July – The Office of the Commonwealth Ombudsman is established.