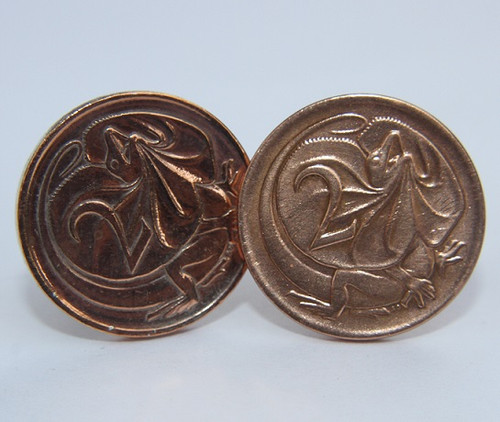 Showcase your individuality with our Two Cent Cufflinks. Fashion for the esteemed  gentlemen and the ideal present for a loved one. These iconic Australian cufflinks are stylish and practical.

Introduced on the 14 February 1966. The Australian two cent coin is a desired and sought after collector’s item. The coin was manufactured at three mints: The Royal Australian Mint in Canberra, The Melbourne Mint and the Perth Mint. It was also manufactured at the British Royal Mint in Llantrisant Wales for the year of 1981. Arnold Machin’s portrait of Queen Elizabeth II was featured on the back of the coin until 1984.  It was changed in 1985 to a version by Raphael Maklouf, which remained until its demonetisation. The decision to remove the coin from circulation was confirmed in the Treasurer’s budget speech of 21 August 1991. The move was due to inflation reducing its value, and the high cost of bronze. Around the same time other countries removed their bronze coins – New Zealand, The United Kingdom and Ireland turned their bronze one and two pence coins into copper-plated steel.

The two cent  bronze coin was taken out of circulation in 1992 The coin is now increasingly difficult to find. Many were melted down to make the Bronze medals for the Australia 2000 Olympic Games. This scarcity has driven up their value making them worth significantly more than two cents. Our Australian 2 Cent Coin Cufflinks are created by hand with a special enameling and resin process. The fruit of our labor is a cufflink with a luster and quality, embodied with a unique history and iconic Australian identity. Makes a perfect gift for that Australian or Lizard lover on your shopping list!

Australian 2 cent coins feature the Frilled Dragon (Chlamydosaurus kingii) also known as the Frilled Lizard or Frill-Necked Lizard. This native of Northern Australia can grow to almost one meter in length. The lizard’s frill is a large ruff of skin around it’s neck which it exposes when frightened. Australia has discontinued the 2 cent coins. With the last coin having been minted in 1991, these coins are increasingly difficult to find. Both Australian 2 Cent Coin Cufflinks show the side of the coin with: A frilled dragon and the numeral “2”. Minted during the reign of Queen Elizabeth II.

The Australian Two-Cent Coin was introduced in 1966 and was the second-lowest denomination coin until it was withdrawn from circulation in 1992 (along with the one-cent piece). It is still counted as legal tender, but is subject to some restrictions. The reverse side of the coin featured the image of a Frill-Necked Lizard (Chlamydosaurus kingii), a reptile native to Northern Australia and Southern New Guinea. The image was designed by Stuart Devlin, who designed the reverses of all Australian decimal coins introduced in 1966. After removal from circulation, some of the coins were melted down to make bronze medals for the 2000 Summer Olympics in Sydney, Australia.

The Australian 2 cent coin is made from 97% copper, 2.5% zinc and 0.5% tin. It has a circular shape, plain edge, it weighs 5.2 grams and has a diameter of 21.59 millimetres. Source: http://en.wikipedia.org/wiki/Australian_two-cent_coin